How KhataBook turns into Leading FinTech App In India

Nobody thinks running a business is easy. And especially in India, where Kirana shops always have a gigantic credit reserve, and it’s not only consumers from the neighbourhood who promise to pay on a later date, but shopkeepers also get supplies from wholesalers and distributors on credit. Keeping the record of all these transactions and settling these payments is a challenging issue for small businesses.

To solve this problem, an Indian startup comes up with an idea of KhataBook – Digital India’s Digital Khata.

The founders of KhataBook saw the problems faced by small businesses and came up with a solution that will be helping them in managing their business & personal ledgers. Khatabook enables them to not only keep an account of receivables but also send regular reminders to debtors.

Khatabook is a Bengaluru based fin-tech startup, it is a mobile app service which helps small and medium business to transfer their physical ledger to digital copies and also allows them to accept online payments.

It shares WhatsApp and SMS reminders to users when money is due to be paid or collected.

It is 100% free to use and safe and secure for all types of businesses, with this shop owner can record credit (Jama) and debit (Udhar) transactions for customers.

Who are the Founders of Khatabook? 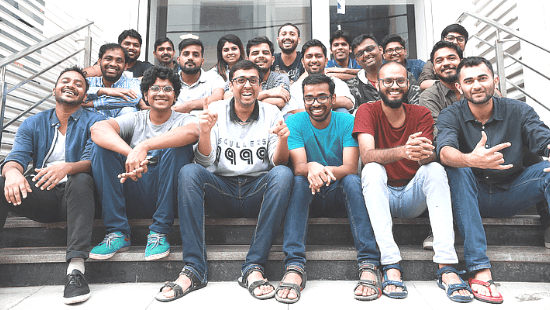 Till now, KhataBook has received a total funding of $173 Million.

This digital ledger app automatically sends a payment reminder to its customers, facilitating customers to keep track of all their transactions and payments.

The story goes back to 2016 when Ravish Naresh, along with his team of college friends, started a digital spend manager app, Kyte.ai. The app helped users understand their expense patterns using their SMS alerts.

Kyte had initial good traction, but it did not reach the expected growth scale. Also, the team realized, all their users were based out of metropolitan cities.

On researching, they found that first-time online users did not deal with digital transactions and they still rely on traditional khata or ledger books.

As per Ravish, they wanted to build something that people want and then try to build a business around it.

That is when the idea for KhataBook developed, and they started work on a simple cash management app and named it KhataBook.

Upon reaching a quick growth, KhataBook got its first big publicity push when famous cricketer Mahendra Singh Dhoni invested an undisclosed amount in the startup and also became its brand ambassador.

KhataBook is now being used in more than 5000 cities and the users range from Kirana shops, merchants, recharge shops.

The app currently supports eleven languages and even has users in Nepal, Pakistan and Bangladesh.

How Much Capital Khatabook has Raised?

In October 2019, Khatabook has raised $25 million in a Series A funding round from GGV Capital, Tencent, Sequoia Capital, along with other top angel investors.

The new financing round, Series B, was led by Facebook co-founder Eduardo Saverin’s B Capital.

The Series-B round values Khatabook at between $275 million and $300 million, has also seen participation from a bunch of investors like RTP Global, Hummingbird Ventures, Better Capital, Falcon Edge Capital, Rocketship.vc and Unilever Ventures, also participated in the round, as did Facebook’s Kevin Weil, Calm’s Alexander Will, CRED’s Kunal Shah and Snapdeal co-founders Kunal Bahl and Rohit Bansal.

Recently it has raised $60 million in Series B funding round from investors led by Facebook co-founder Eduardo Saverin’s venture firm B Capital, taking its total funding to $80 million. Other big names associated with the ledger app are Sequoia India, Tencent and partners of DST Global. Former Indian cricket team skipper Mahendra Singh Dhoni too has been reported to have invested an undisclosed amount in the young company.

Naresh says that the money will be used to expand its engineering team which currently is only 15 techies-strong. It plans to tie up with NBFCs and leverage the vast amount of data on its platform to disburse loans to small businesses. Apart from lending, more add-on software services are in the pipeline, and Khatabook is looking to monetise its platform with the help of these sometime next year.

Khatabook aims to have three crores, active merchants, on its platform within the next two years. According to a government report, India had around 6.33 crore MSMEs last year, a huge target group for the app.

Let's tailor the right solution for your Startup business